skip to main | skip to sidebar

Posted by Manatee Records at 7:30 PM No comments:

There are a handful of female MC's in the music business who could put a place on lock during their performances. I recently discovered this upcoming artist, Foreign Skrilla while scrolling through IG and low and behold she has roots with my birthplace, the city of Belize. I was drawn to her fast and furious lyrics since I have spent most of my adult life working with artists from Chicago beginning in the early 90's, but she has something to offer in this game. Foreign Skrilla is a local rapper from Los Angeles, who just released her latest hot new single “Di Wrong One.” As she describes the song I can tell that although has been in this rap thing for some time and who was influenced by the sounds of the caribbean mainly reggae, soca, spruge and merengue songs of yesterday. The song is being picked up by many Djs who are on the radio as well as in the clubs throughout LA but the song is infiltrating in every major market and Radio Mixes on Internet as well as Commercial radio stations. Skrilla has joined the elite group of artists with caribbean roots who have and are currently making an impact on mainstream urban music in this country. The new single release is a combination of Hip Hop and Dancehall reggae rhythmic vibe drums and backdrops reminding us of the global struggles we must endure daily and the lamentations by songs of all the artists in this game in the hip hop and Rap communities throughout the world. The rising superstar is set to produce several upcoming projects which Skrilla is currently working on in the studio, but with several other previous titles available on streaming and download platforms. 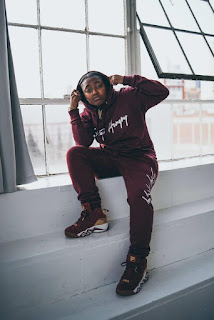 Foreign Skrilla is slowly but surely making her mark on the Hip-Hop industry city by city as when asked about the hands waving for the upcoming music, the artist nods with that sheepish Foreign Skrilla smile. Be on the lookout for the new music and expect to see the Skrilla name in mainstream media in the future. Go stream this heat and request the song on your favorite Internet and Commercial radio Stations!

Breezy Says: Eli Loud "Surplus" EP | @Eliloud: Eli Loud has been making his rounds around the Chicago underground music scene more recently resulting in many in the music community. Listen up for his EP "Surplus".

http://www.breezysays.com/2020/07/eli-loud-surplus-ep-eliloud.html?spref=bl
Posted by Manatee Records at 4:16 PM No comments:

Sleeper Videos always make you say Hmm. Turned on by my son to this Artist and man he is on point. DAP has been on the grind for a few and he is on the cusp of this Biz. His Rendition of "Too Young" is an ode to the young. Lyricist in the rough like a diamond. Listen with care but Listen with love. DAP The Contract has a part of this Biz. Support the talent. This Video "Holiday" shows his versatility in this game. Check him out today

Posted by Manatee Records at 3:18 PM No comments:

Posted by Manatee Records at 3:10 PM No comments: